There are fun things in the gaming and ecdotes section of these archives.

But I've had too much trouble posting to Livejournal to continue keeping this updated, and my actual blog is now at robheinsoo.blogspot.com

Upper Deck is going to have Legendary: Big Trouble in Little China out at GenCon. That's less than a month away so it's time for some previews!
One of my design goals was to create a set with a lot of player interaction. I wanted moments that made players talk and act during each other's turns and moments when everyone cares about the flip of a specific card. 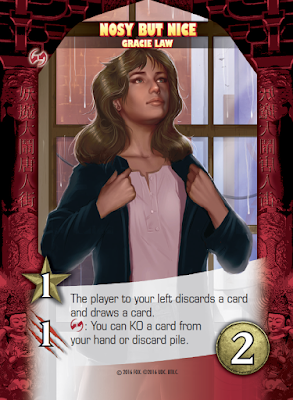 Nosy But Nice is one of the common cards for Gracie Law, meaning it appears five times, so it usually shows up in games that include Gracie. Nosy But Nice always does something good for the opponent to your left, letting them discard a card and then draw. It's not a *huge* help to your opponent, so you don't have to feel like you're handing them the game when you play it, but when someone helps you out with Nosy But Nice it a) feels great; and b) sets the tone for a game in which players will help each other out a bit instead of always looking to inflict little cuts.
Towards the end of a tight game, or in the hand of a highly competitive player, Nosy But Nice may end getting discarded as too much help to the opposition and not enough help to its owner. But that's more likely to be true after its Covert trigger has gone off earlier in the game, allowing the owner to whittle out a strong deck that doesn't need more help from the 2-cost card. 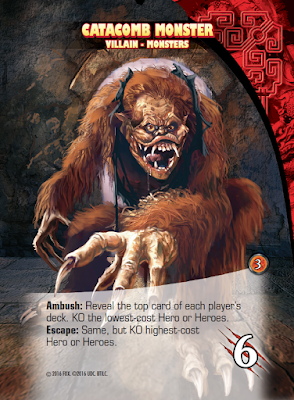 The Catacomb Monster belongs to the second style of interactive moment, creating tension as players take turns revealing the top card of their decks. Especially at the start of the game, the Ambush effect isn't so bad. It usually KOs a bunch of 0-cost starting Heroes and everyone is happy, which fits my sense that the Catacomb Monster feels ominous in the movie but doesn't wreak all that much havoc. On the other hand, the awful Escape effect becomes a universal problem that everyone tends to work together to prevent. Or pretends to work together to prevent, if they're aware that they have lower-cost cards then everyone else and are not as likely to be hit or hurt much if they lose a Hero.
I'll show a couple more cards in another post next week, probably showing off the way the heroes of the movie interact, which is a bit different than Heroes in other Legendary sets.

I've gasped out loud while reading one book.
This book.
Twice.

I don't want to say too much about the story. Surprises exist. I'd rather not hint.

It's a blend of the brutal and the mythic and the humane, glowing in unforgettable language that's often worth reading aloud.

On e-readers the novella is cheap. $3 cheap. I'm buying a paper copy for my shelf of favorite books and to pass around to friends.

The Pristine City is a fun 57 page 13th Age-compatible adventure for 4th or 5th level characters from Stacey Janssen and David Noonan of Dastow Games.

While reading the adventure and framing my response, I realized that my gaming experience is probably different from most GMs. So far as I remember, and I'm thinking all the way back to Top Secret and Chivalry & Sorcery and Monsters! Monsters! and AD&D and then Champions andRuneQuest and the days when I bought a LOT of rpg adventures . . . going all the way back and working forward, I have never run a published adventure that was written by someone else. Unless you count:
a) the pieces of published adventures I played as solitaire system-tests when I was a kid; or
b) the co-op/solo micro-dungeons published for The Fantasy Trip, when I was playing as well as flipping the pages; or
c) the adventures in 13th Age in Glorantha that were written by Jonathan.

So while I've read big chunks of The Pristine City, and skimmed the rest, I haven't run it. The fact that the book got me thinking about how I would run it turns out to be extremely unusual.

Without giving too many spoilers, here are some things I like about this adventure.

I don't think Trump is going to become president. But if he does, he’ll be in the running for an uglier prize.

Two-thirds of the Senate can vote to impeach a President for "treason, bribery, or high crimes and misdemeanors."

Trump’s campaign promises high misdemeanors. Given his current and intended disregard for the law, he may get around to some crimes. I don’t expect his conduct to change if he’s elected. Even if you believe his behavior could shift, Trump seems likely to provide enough for a Senate composed of Democrats and worried Republicans to work with.

We played Three Dragon Ante a few weeks ago, just a couple days before the coins from the last Campaign Coins Kickstarter showed up in the mail. So for next game, I'm ready with metal coins. It's a benevolent circle, given that 3DA helped inspire Campaign Coins to start making gaming coins! 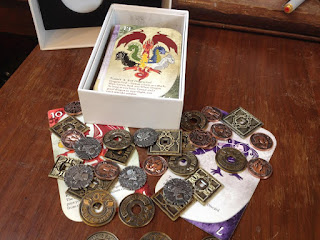 Later this year we'll be able to play with dwarven towers from the 13th Age Coins and Icon Tiles kickstarter, which sure looks like it's going to fund in style and will probably be making the twelve-sided icon die from our 13 True Ways kickstarter available again. (You can find a few of the square dwarven tower prototypes anchoring the coin pile above.)

For those of you who have both the original Three Dragon Ante and the Emperor's Gambit sequel, here's the card list I'm playing Three Dragon Ante with these days, a mix of dragons and mortals and dragon gods from both the sets. This set-up has a good mix of card drawing, outright theft, and manipulation of the ante cards. If people have other mixes they play to get different effects, I'm curious to hear it.

Mortals & Li'l Dragons:
Hatchling
The Dragonslayer
The Druid
The Emperor
The Queen
The Sorcerer
The Spy
The Thief
The Wyrmpriest 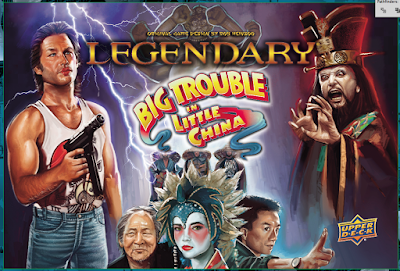 GenCon is going to be fun this year!

In addition to however many volumes of 13th Age we have out by and for the show, I'll be enjoying the release of a new game from Upper Deck based on my favorite deckbuilding card game.

I've been a Legendary fanboy since Devin Low invited me to early playtests. You'll find my wife Lisa and me in the playtesters list for most of the Marvel Legendary sets. So it was wonderful to design a Big Trouble in Little China set intended to be playable with the Marvel sets.

The Villains and Masterminds and Schemes can all add something new for people who want to draft big trouble into their Marvel games, and Iron Fist could pay a visit to Little China. But BTiLC is very much its own experience, with interlocking characters and mechanics that want to be played together, as well as new Schemes that pivot around Chinatown. I'm particularly happy with the story-oriented solution for handling the starting heroes, but it's a little too soon to spill those beans. I'll say more about the game's design goals and solutions in future posts.

This was so much fun to make! The result is sort of a love letter: Legendary is Lisa's favorite game, and Big Trouble in Little China is designed to be Legendary the way Lisa likes to play it. Except for the worst of the Masterminds . . . Lisa saw that Mastermind and said "Oh. You just designed this to screw me, didn't you?"

Me: Not you. Your play style.
Lisa: The world. 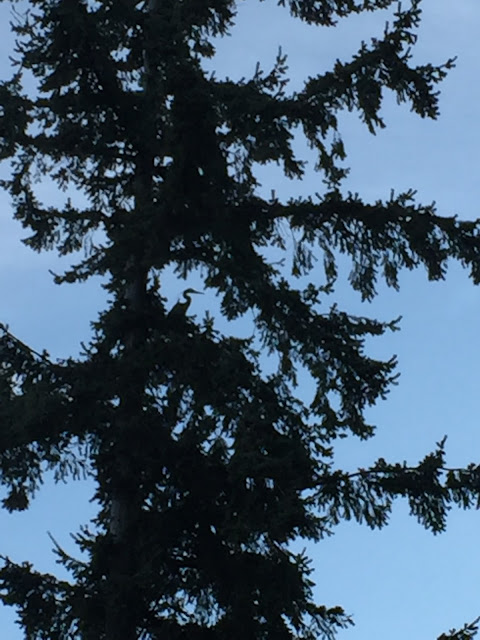 I'm excited about this year's 13th Age Monthly lineup. The first three months show off the mix of GM material and player goodies we're aiming for. The artists are doing splendid work, and in fact for much of the year, 13AM is likely to be the place to see color 13th Age art.

As you can see from the design credits so far this year, I'm staying fully involved with the Monthly. 13AM isn't quite a Ken Writes About Stuff situation, like Pelgrane's other monthly game subscription, because there will always be other designers writing for the Monthly. But I've gotten a lot more involved than we expected when we started this project, developing and art-directing all the issues. I've never handled a monthly publication process before. It started as a learning experience and has become fun.

We promise 4000 words a month and we nearly always publish more than that, because . . .fun!  If you're subscribing, you've already got the first two issues shown below, with covers and interiors by Lee Moyer and Patricia Smith. Sorcerer Summoning, with cover and interior art by Rich Longmore, is getting shown off for the first time below. It will be out at the end of this week.If you subscribe now you'll get all the issues from 2016 as well as the OP adventures when they release. . . . and that should also be happening at the end of the week, since ASH LAW's Into the Underworld Part IV is ready to be unleashed.

See you in the Monthly. 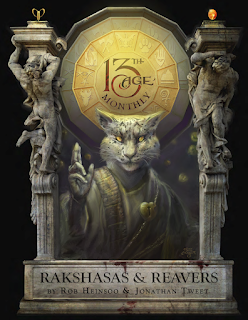 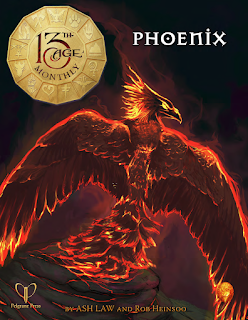 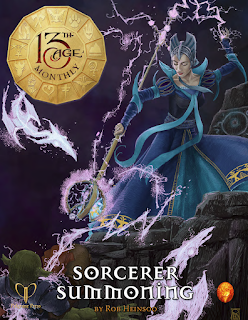 Jonathan and I are so close to finished with design work on 13th Age in Glorantha we can taste it. A taste is not a meal, and we're still working this week.

Jonathan is deep in a heroquest in which Humakt reasserts control of Death. I'm handling Sartar Magical Union mechanics and writing geography bits.

A lot of fun things have entered the game in this last phase of design. I thought I'd share one here that shows Glorantha's visual style and our use of the runes. This is the almost complete 4th level monster list that shows how we're using other 13th Age resources in Glorantha.

P. XX references are to monsters in the book, the other creatures are from previous 13A books as indicated. If names have been changed, the original name appears in brackets.

The runes in the list start with Air swirling on top, then Beast like a dragon's eye, Chaos looking like a horned devil, the great blot of Darkness, one Earth creature, one Fire creature, several Moon creatures of the Lunar Empire, and a couple weirder undead with the Unlife rune.

We're pretty excited about how the full Monster List has turned out as both a resource and inspiration. GMs will have plenty to work with if they only have the core book and 13G, while anyone who has 13 True Ways and the Bestiary ends up with way more additional material than we expected.

[[for a better view of the table that can be clicked and enlarged, head to the blogspot I keep more uptodate, at http://bit.ly/1UJJOzI]]